I apologize that you didn’t wake up to a blog this morning.  I learned three things trying to do one on the bus:

So we started our Sunday by sleeping in an extra ten minutes (yeah!) and meeting down in the lobby.  I got us checked out of the hotel and saw one of our hotel Community Life members checking out.  They had a couple of signs and I asked if I could take them and she said, “Sure!”  So that will be a cool display item.

Our bus was about ten minutes late or so due to an accident on the freeway but we got loaded up and we were the last of the big groups to be picked up, so we were sitting in the back of the bus again like we chose to do on the trip down (this will be important later).  We picked up the last group and then the driver dropped us off just a few blocks from Ford Field and near Comerica Park, home of the Tigers. 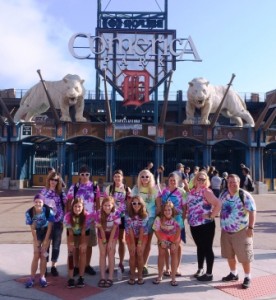 We got to our spot about twenty minutes after the doors had opened and found our normal rows taken!  The gall!  We just sat a few rows up and not too long after the kids from Cumberland joined us for the third straight day (which made a girl in our group very happy).  My sister and niece visited to say goodbye before and then during the service (my sister to me, my niece for someone else!). 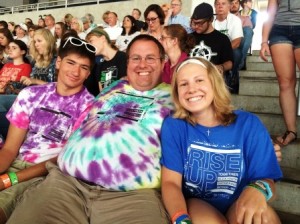 Worship started and we heard great music from the House Band, had a wonderful sermon by the ELCA Presiding Bishop Elizabeth Eaton, thanked the retiring director of the Youth Gathering and installed a new one, and took communion with 30,000 of our closest friends.  I can’t tell you how cool it is to watch and see that happen.  It is just so neat and amazing. 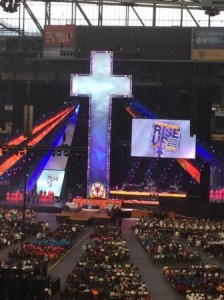 Near the end of the service, we did one last big wave around Ford Field and at the end of the wave, they revealed the location of the 2018 National Youth Gathering: Houston, TX! 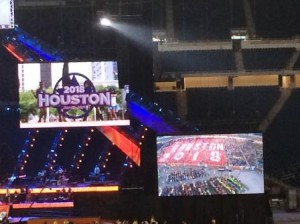 We walked back and got to the bus and got settled in.  We stopped at a McDonald’s about an hour and a half to eat and I spent the time typing in all of the kids thoughts about the trip that they put in their trip journals.  We got back on the bus and as we kept going we noticed a small issue.  The bathroom stank.  Really stank.  We had tried to discourage people of using it but a couple of kids from another church made multiple trips.  It got so bad that we put some dryer sheets on our vents to help with the smell!  We were able to get some Frebreeze eventually and that helped, but it was never great!

The bus ride was long and the kids spent time sleeping, looking out the window, reading, talking, and playing on their phones.  We watched four movies, “Journey to the Center of the Earth,” “Finding Nemo,” “Elf,” and “Ratatouille.”  We made a stop in Madison and changed drivers and got some Culver’s, which made our ice cream crazy people happy.  Eventually, after about 15 hours, we pulled into the BP in Boyceville just after 2:00 am.  We unloaded, left the bus, and the Youth Gathering was officially over. 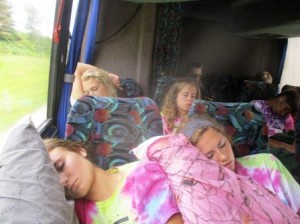 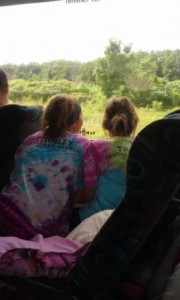 It was a really good Gathering and we appreciated all your prayers and support.  I give major thanks to Wendy Bird for chaperoning and all the great work she did.  The kids will be presenting their experiences on Sunday, September 13th, so join us for worship that day! 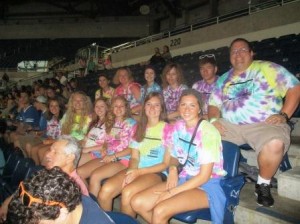