Hello everyone from a Super 8 on the fringes of Tulsa, OK! I’m sorry I couldn’t get this out last night as the Wi-Fi isn’t the best here in the hotel.

We met at Trinity at 5 am somewhat bleary eyed but very excited to begin our adventure to Houston.  I was impressed and shocked that everyone was on time and ready to go, which is a miracle of Biblical proportions when it comes to High School youth. The kids picked up snacks, their YG packet, and after a prayer loaded into the vans to start this journey. 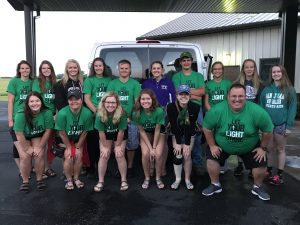 Along the drive kids watched movies, slept, sang, danced, and consumed various forms of snacks that weren’t good for them.  Occasionally they slept on each other or in my van when a song came on my 17 hour playlist yelled out “Turn it up PB!”  We made two stops for gas and breaks before our first goal, Kansas City, MO.

Anyone who knows me knows that I have an unhealthy obsessions with bacon, Star Wars, and BBQ.  Kansas City is one of those BBQ mecca’s in this great country and the ribs that I make are KC style.  So, for lunch, we stopped at an institution, Arthur Bryant’s in KC.

I think they were pretty amused to see this large group of kids in green shirts fan out to the tables.  I tried mightily to figure out what everyone wanted and then went up to order.  They were so awesome in that they helped me order in the easiest way possible for them (and cheaper for me), then for our convenience told me that they had a large room that we could use if we wanted.  It was great!  We ordered large amounts of ribs, pulled pork, brisket, chicken, and turkey along with fries, baked beans, potato salad, and cole slaw.  It was a feast to make a Brad sing for joy (instead we sang our grace).  Everyone loved the food and we boxed the leftovers for later, which I ate in this very room I’m sitting in last night for dinner.  Only meat.  Others took the potato salad and McKenna and Jaslyn really wanted the fries.

After eating our fill of glorious, glorious BBQ (mouth salivating still), we headed to the Kansas City Zoo.  Little did we know prior that this zoo only stays open till four pm, giving us just over two hours to explore.  We split off into groups to see gorillas, penguins, zebras, giraffes (there was a baby), free-roaming kangaroos, tigers, and more.  The KC Zoo is a huge place with a tram, train, and even a ski lift.  It is a very nice zoo and we had a good time.  It was also a nice introduction into the heat we are going to experience this week and all of us were sweaty and hot by the end.

Once we had finished exploring our animal sides, we piled into the vans to get to our sleeping point of the this leg, Tulsa, OK.  Many of our weary warriors slept a large part of this leg but at least in my van as we got an hour out, the group perked up and got a little silly (gummy worms may have been tossed at each other).  We checked into the hotel, split off for some food (some ordered pizza, others wanted McDonald’s, some wanted ice cream, the pastor ate all the leftover BBQ).  We turned in for bed to rest up for the next leg: Houston!

We ask that you continue to keep our group in your prayers in the midst of this journey!  Thank you for your support!  God bless!

Today we started out bright and early to leave Tulsa and get to Houston. Kids were tired so there was a lot of sleeping early on. An hour out we got a phone call from the Tulsa hotel saying a phone had been left in a room. Of course. They agreed to send it to Houston for us.

We made a stop for food and kept on trucking, entering Texas. We made it through Dallas and were in the home stretch to Houston. My GPS noticed a massive slowdown on the interstate so it re-routed us on back roads through the Texas countryside. There was some beautiful country we drove through and it was a nice break from interstate highway travel.

We pushed through to Houston and our hotel, the Crowne Plaza NRG.  We are literally across the street from NRG Stadium where the Mass Gatherings are so we will be able to walk to everything.  The entire Synod is in the hotel so we will see all sorts of people we know.

Check in at the hotel took a bit longer than we wanted but everything got squared away. We took a brief moment to get registered and grab our wristbands for the Gathering itself and hauled all our stuff to our rooms. It was great to feel like we were finally here in Houston after all the hours in the car.

After a quick meeting and changing we headed to Galveston and a visit to the Gulf of Mexico and some beach time. PB’s van was perilously close to running out of gas but we found some before disaster struck!  PB was getting a little nervous!

We went to Stewart Beach in Galveston and it is a big, beautiful beach.  The sand is really fine and the beach was not crowded at all.  We had about three hours of daylight or so left and so many jumped right into the water, though some relaxed on the beach.  Nearby was a McDonald’s and a gift shop so many of the group traveled there for souvenirs or a quick bite. 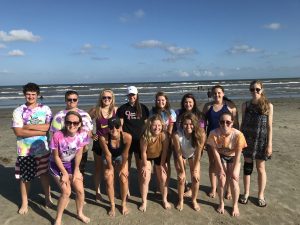 The ocean breezes helped to mitigate the heat and the humidity and there was a peaceful tranquility looking over the ocean, feeling the sand between the toes, and watching sea gulls dive bomb Chesney and Megan as they threw the remains of their McChicken sandwiches into the air.  We stayed until the sun went down and though we didn’t want to leave, hunger and the desire for a nice bed won the day.

Once we entered Texas, we kept seeing this restaurant called Whataburger.  It looked like a local chain of hamburger joints so we decided to try it in Galveston.  Though not as good as a Buckshots hamburger from home, it was good enough to get some food into our stomachs. We ran into some strange slowdowns on the way back and traveling in the dark meant that it was impossible for PB and Kim to keep their vans together, yet we still pulled into the hotel at the same time.  Please make sure you ask Kim about her experience at the toll booth and the christening of PB’s nickname for this trip.

We cleaned out the rest of the stuff from the vans and met in PB’s room for evening devotions and planning for the next day, which will be the first official day of the Gathering.  Follow us at the Mass Gathering starting at 7:30 pm at www.elca.org/gathering.  Thank you for your prayers and thoughts!