One of the items on Amy’s and I bucket list when we went to Washington, D.C. last week was visiting the United States Holocaust Museum. We scheduled it for the last day and gave ourselves a large amount of time to get through it. Being someone who has always been interested in the history of World War II, reading countless books, watching movies and television shows about it, I felt like I was readily prepared for the museum. I had seen much of the gruesome pictures and videos of the Holocaust. I knew what I was getting into before we started.

I was wrong. Touring the museum is not what I would call an enjoyable experience. Moving, yes, but the kind of moving that sticks with you like peanut butter sticks to the roof of your mouth. You see pictures going up three floors to showcase a community of Jews that had lived in the same place for hundreds of years that no longer exists. You stand in a railcar that held hundreds of people, carrying them to a death camp, and you can feel the fear they must have felt. . You walk into a room filled with shoes collected by the Nazi’s from those people in those railcars and not only does the sheer number overwhelm you, it is the SMELL of the shoes that really gets to you.

You feel such a sadness and you get lost in the midst of it all.  Time stops.  When Amy and I got done, we realized we had spent way more time in there than we realized.  The museum takes you from the very beginning, including anti-semitism from the rise of Christianity on, including some of the writings of Martin Luther, all the way to the rise of Hitler, the Holocaust, and the aftermath of the Holocaust.  Besides all the big picture stuff, it gives you a chance to read and hear the stories of individuals.  You can sit and read people’s accounts of being in the concentration camp.  You can read the stories of people who risked, and lost their lives, trying to help others.  You get a little booklet of the story of one person who was affected by the Holocaust.  You can read my person’s story at this link: http://www.ushmm.org/wlc/en/idcard.php?ModuleId=10006360

But the reason I feel shame is because, if I look inside myself, I can’t honestly say that I would have done anything.  I can’t honestly say, “I would have been different.”  I think the many of us would like to say, “I’d risk my life, my family’s life, to help someone, to make the madness and destruction stop.”  We would like to say that. I would like to.  Yet, even today, we see injustice and violence going on around us, big and small, and we often do nothing to stop it.  We see people getting degraded and bullied because they aren’t “cool” or come from the right place or have the right job or even have the right heritage.  Systematic slaughter still occurs around the globe and we often stand by and do nothing.  We demean people different from us even in our own backyards and we don’t stop it.  Because we are afraid.

As I left the museum and as I have reflected on my visit since then, I have mostly prayed to God a couple of things.  I have asked for forgiveness for all the times I stand by and do nothing when I know something should be done.  I have asked that we might, as people, work to stop injustice in even the smallest ways.  And I have prayed that, if something like this would ever happen again, that I would have the courage and the faith to stand up and speak out.

There are two quotes/images, that I want to leave you with.  One is from the very start of the museum and one is at the end of permanent exhibit.  The first is from the Bible.  The second, from a Lutheran pastor who was first a Nazi supporter and then an opponent who was sent to a camp.  I hope that they both stick with you as they have with me.  And, I hope you get a chance someday to go to Washington, DC, and not just experience all the wonderful monuments but also take an opportunity to visit the Holocaust Museum.  I think it is something that everyone should see. 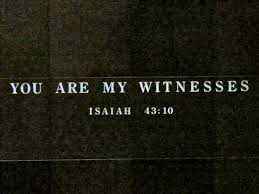